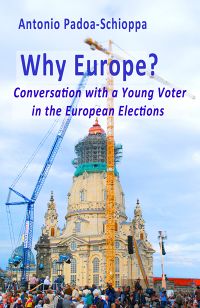 Cover
Antonio Padoa-Schioppa
Why Europe? - Conversation with a Young Voter in the European Elections
English translation, Anne Parry ed.
The translation is based on the second extended edition published in March 2019 by Ledizioni, Milano

Antonio Padoa-Schioppa, Emeritus Professor at the University of Milan, taught History of Medieval and Modern Law, and worked on the Constitution of the European Union.
Recent publications include: A History of Law in Europe: From the Early Middle Ages to the Twentieth Century, Bologna 2016 (English edition: 2017); Verso la federazione europea? Tappe e svolte di un lungo cammino, Bologna 2014.

It is not easy to understand what the European Union is and what it may become. It is a complex, multi-faceted edifice, the result of the recent and past history of Europe, with all its lights and shadows, tragedies and successes. This Conversation aims to shine a light on many aspects of the European creation and to explain some of the multiple connections between them.

Televised debates, the press and messages sent via the Internet almost always give a distorted picture of what the European Union is today and what it could be in the future.

Numerous praiseworthy and informative books are published every year on the subject of Europe; these are often aimed at a limited number of specialist readers. There are few texts written for non-specialists, particularly for young readers, which truly give the idea of the magnificence of the European Union. In this book the EU is presented as a majestic but unfinished and therefore precarious cathedral. The author represents the multiple facets of European integration in the form of an exchange of questions and answers with a young voter who is going to take part in elections for the European Parliament for the first time in 2019. The decisive role these elections will have for the future of the Union is by now clear to all.

This book is meant to be read through, either from beginning to end or chapter by chapter, rather than as a reference work. It may be used in classrooms to stimulate discussion. The selective bibliography and the links to websites may be useful for those who would like to learn more about the vast number of interdisciplinary subjects underlying the European project, including economics, law, political science and history.

Some of the issues considered in the book are the problems and challenges of today’s world (including the dangerous situation in Italy), the great conquests of the European Union and the institutions that have made these possible, the steps still to be taken, and the risks and opportunities beyond the borders of Europe. Any attempt at an overview should cover at least three main areas: an understanding of what Europe has built up over three quarters of a century, how much more needs to be done to complete the great aim of union, and the concrete risk of regression.

I have talked about Europe for many years with young and older people, with students and colleagues, as well as with friends, and I am grateful to them all. I discussed the Conversation with Marco Aliano, who is now a philosophy student in Venice. Marco has agreed to be represented in conversation with me, the elderly APS and has contributed with his own questions and comments. Many friends (including in particular Anna Tempia) kindly read parts of, or the whole Conversation and provided useful suggestions and comments. The author alone is responsible for any remaining shortcomings or errors.

The text is available as an e-book. It can also be found on websites that wish to include it among their links and in particular on this site set up by Andrea Guadagni, who I thank for his invaluable support for the project.

Anne Parry and her team of collaborators have translated the Conversation into English in record time. My sincere thanks to them all.

The Conversation has been translated into English by British volunteers living in Italy who have been affected in many ways by the consequences of Brexit (although at the time of writing we are still hopeful that it may never happen). We are grateful to Professor Padoa Schioppa for allowing us to translate the book, which will be published and available free of charge so that people voting in the 2019 elections can be better informed of the value of the EU. We hope the book will be read by all those who care about the future of Europe, which is where we have made our lives, set up businesses, worked in companies, schools and universities, and have brought up our children as British, Italian and European citizens of the world.

The translation of the book is dedicated to Diana and all the other children whose future will depend on us working together in Europe, in particular to limit the effects of climate change and other disasters which can only be dealt with by a united European Union.

Here you can download the book Why Europe? in PDF format.

I. Risks and opportunities

First things first
Some objections
No to Europe, to the euro, to migrants? Yes to the Nation
What has the European Union given us?
Risks for Italy, risks for Europe
The European Parliament, a crucial deadline in 2019

III. The structures, politics and history of the Union

IV. The Future of the Union